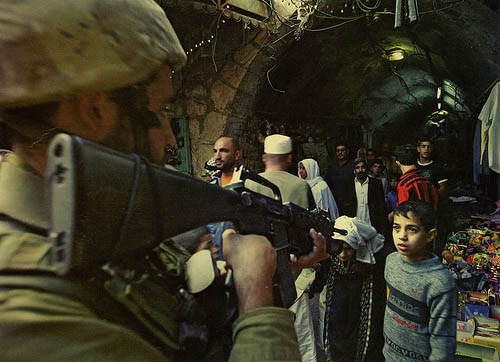 Haifa resident Maor Yisrael, who is serving time for hitting his girlfriend and another man, sentenced to additional year-and-a-half behind bars for beating two Arab-Israelis while serving in military

The Haifa Magistrates’ Court on Wednesday sentenced Maor Yisrael, 27, to a year-and-a-half in prison for assaulting two Arab men. This is the third time that Yisrael – who served as a police officer during his military service – is sentenced to jail time, after previously being convicted of hitting his girlfriend and another Arab.

The incident occurred in 2008, while Yisrael was on a motorbike patrol with another police officer. The two spotted two Arab men sitting at a bus station in Haifa’s Neve David neighborhood and decided to stop and search their vehicle.

During the procedure, Yisrael beat the two men, and later called a police vehicle, led the victims to a police station and filed a false police report in which he wrote the two Arab men were sorry for their acts.

Judge Yechiel Lifshitz ruled that there is no dispute over the graveness of Yisrael’s acts, who while on duty as a police officer “employed arbitrary violence against two innocent people.”

Lifshitz addressed Yisrael’s former record, saying that it testifies to the defendant’s character, and shows that “it is not a one-time event, but rather a violent man’s regular pattern of action.”   The judge convicted Yisrael of assault, breach of trust, disruption of legal proceedings and abuse of his power as a police officer, and sentenced him to one-and-a-half years in prison. He ordered Yisrael to pay NIS 2,500 ($663) in damages to each victim.

The police officer who was patrolling with Yisrael was also convicted and sentenced to three months probation, a fine of NIS 1,500 ($398) and NIS 2,500 in damages for each of the complainants.

Nearly all the Republican presidential candidates are showing their muscles, supporting the war on terror and a robust military while also vowing to do whatever it takes to disarm Iran. They know that it is essential to play the jingoistic“American exceptionalism” card, and they understand that being president also means becoming commander in chief of America’s armed forces with the responsibility for committing U.S. soldiers to die for their country. But how are they qualified to do that? Of the sorry lot on display, only Ron Paul and Rick Perry have ever served in the military in any capacity, Paul as a U.S. Air Force medical officer and Perry as an Air Force pilot. The dramatically bellicose Newt Gingrich, who wants to coordinate a joint military operation with Israel to attack Iran, did not serve during the Vietnam War. He received deferments because he was a student and because he was, at the time, married to his first of three wives. Other candidates, including Rick Santorum and Jon Huntsman, are too young to have been subject to the draft, but neither volunteered for military service. Santorum entered a law firm, and Huntsman went to Indonesia as a Mormon missionary before stepping into the business run by his father.

But perhaps the most spectacular chickenhawk of all is Mitt Romney, frequently cited as the likely Republican candidate, who alone among GOP aspirants to the highest office in the land has advocated increasing the size of the Defense Department. Romney apparently is not aware of the foreign policy misadventures of the past 10 years and is eager to double down on a formula that has not worked very well. He believes that the correct response to the many threats in the world is to throw more money at the Pentagon. He also apparently has not noted the sinking economy, which might suggest to anyone but the politically ambitious that retrenchment would be preferable to more interventionism. But as an experienced self-described “businessman” he is not afraid of running up a little more debt.

Romney has several times declared that Iran will never acquire a nuclear weapon if he is president, suggesting that the other candidates are pusillanimous on the issue and implying that he alone will attack the mullahs “preventively” if such a development appears to be imminent. The willingness to start a war with a country that can hardly threaten the United States is the cornerstone of his foreign policy, which he describes as dealing with the world from a position of strength. If that sounds a bit like the Bush Doctrine, it should.

Romney’s personal history suggests, however, that his hawkishness might well be a recent affectation, carefully crafted to suit the presidential persona that he would like to present to the voting public. In particular, he has never been inclined to place either himself or anyone close to him in harm’s way to advance the wars that his country has been fighting, wars that he defends both in principle and in detail.

Mitt Romney was born in 1947, the son of George Romney, a former senior General Motors executive and governor of Michigan. The birth date means that he was eligible for the Vietnam War draft when his student deferment ran out upon graduation from Brigham Young University. But, before he graduated, instead of being drafted or enlisting in one of the military services, he obtained a two-and-a-half-year deferment to leave school temporarily and go to France as a Mormon missionary. The deferment described him as a “minister of religion” even though he had received no formal training as a clergyman. At the time, large numbers of young Mormons avoided military service in that fashion.

While in France converting the heathen Roman Catholics, Romney clearly learned a lot about foreign cultures, something that undoubtedly will stand him in good stead as president. He recently described his astonishment when encountering an old-style toilet that had the tank up on the wall and was activated by pulling on a handle connected to a chain that released the water. Romney had never seen such a device, which probably means he had never traveled to New Jersey or other backward regions during his formative years.

Toilet hydraulic engineering aside, Romney managed to avoid the Vietnam draft. His father, George, apparently had become an opponentof the war, though he did not speak out openly against it, and Mitt might have also quietly opposed it. He then went into business and founded Bain Capital, which is certainly worth a separate story all by itself. He went from being a rich man’s son to becoming a very rich man in his own right. Eventually, he followed in his father’s footsteps and wound up in politics, first as governor of Massachusetts and later as head of the Salt Lake City Winter Olympics Committee. Now he wants to become president.

Along the way, Mitt fathered five sons: Tagg, Matt, Josh, Ben, and Craig. You might have thought that at least one of the sons of a man with national political ambitions would opt for either a tour in the military or government service of some kind. At a minimum, it would demonstrate a tad of respect for and engagement in the state’s institutions. None did. Mitt was challenged on the campaign trail about the lack ofnoblesse oblige exhibited by his offspring, and he replied that“one of the ways my sons are showing support for our nation is helping to get me elected.”

All of this is not to pick on Mitt Romney, though his family’s avoidance of military service is notable particularly when measured against the candidate’s own willingness to use force around the world when the United States is not actually threatened. It has often been suggested that if the children of leading politicians and neocon pundits were required to take up arms to carry out the schemes concocted by their parents, the desire to engage in frivolous wars would quickly vanish. Be that as it may, Romney is far from unique in that one does not see the children of Huntsman, Santorum, Bachmann, and Gingrich rushing off to enlist either. To give Sarah Palin her due, her eldest son did join the Alaskan National Guard and did do combat duty in Iraq, so she, at least, put her money where her mouth most assuredly was.

One can easily argue that President Barack Obama is even worse than the Mitt Romneys of this world, because he was elected in large part by antiwar voters but he has brought more war and a frightful expansion of the state security apparatus, including the indefinite military detention and even assassination of American citizens. But that is to avoid the issue of how a country that so desperately needs peace and reconstruction can produce so many clueless but hawkish politicians who are themselves completely ignorant of war and soldiering except insofar as they follow the Gingrich model of reading about it in books. Nevertheless, the poor fools persist in mouthing the slogans of empire. And it has consequences. Constant warfare might well mean the end of our experiment in republican government and could quite possibly bring about the impoverishment and death of many of us.

Comments Off on MEET THE REPUBLICAN CHICKENHAWKS